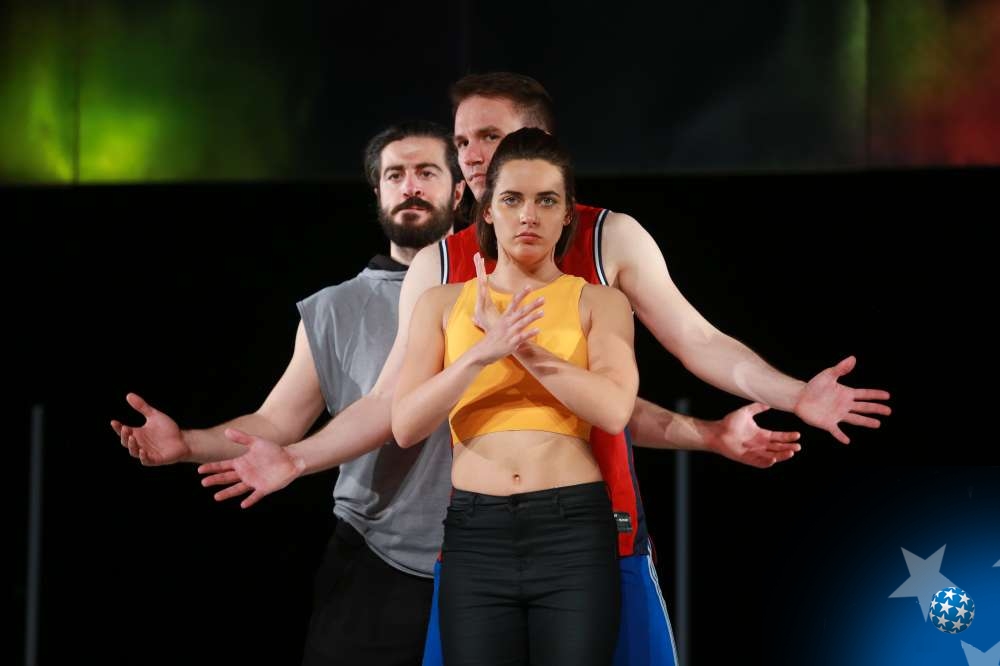 Playwright Milan Ramšak Marković and director Sebastijan Horvat enter a brilliant, intelligent conversation with Heiner Müller and overwrite Fyodor Gladkov's Cement once again, to show us aspects of revolution from rave to the grave - and back again. Shaped as two completely different parts, the performance makes a strong unity that is bold, exciting and moving, creating a dynamic dialogue through time and space reflecting the standing point for individuals in the present moment, in different realities.

Cement Belgrade is a performance of great artistic achievement, on behalf of the director, as well as on behalf of the whole collective. A complex connecting journey between generations, young and aging bodies as well as theatrical practices and aesthetics. Between the past and the future, life and death, the private and the political, with hope, disillusion and despair. As strong as the raveolutionary energetic expressions are in the first part, as stunning and beautiful the acting is in the second.

I PUT A SPELL ON YOU

Director and choreographer Ehsan Hemat, his team and his strong, diverse dancers put a spell on the audience, connecting the personal tragedy of an Iranian theatre maker with one of modern time’s big challenges: the extensive surveillance and digital manipulation of humanity. I Put a Spell on You shows and discusses through a choreography of censorship the internalization of long lasting effects of suppression of the body and mind, and at the same time transcends the universal threat of our current society being dominated by the controlling Eye of technology.

Moving in the blind the three dancers are under constant threat and control, manipulated by electricity shocks. The hovering drone is an important player of power, which makes the dancers incapable to escape the spell they are put under.

The piece combines a perfect mastering of the body in movements that are interrupted, cut short, executed in staccato. It creates a clear unity — under surveillance.

The penetrating musical score enlarges the underlying threat. A sudden relief is offered with the well-known melodic title-song I Put a Spell on You. The music works like a charm but also sets you on the wrong path. 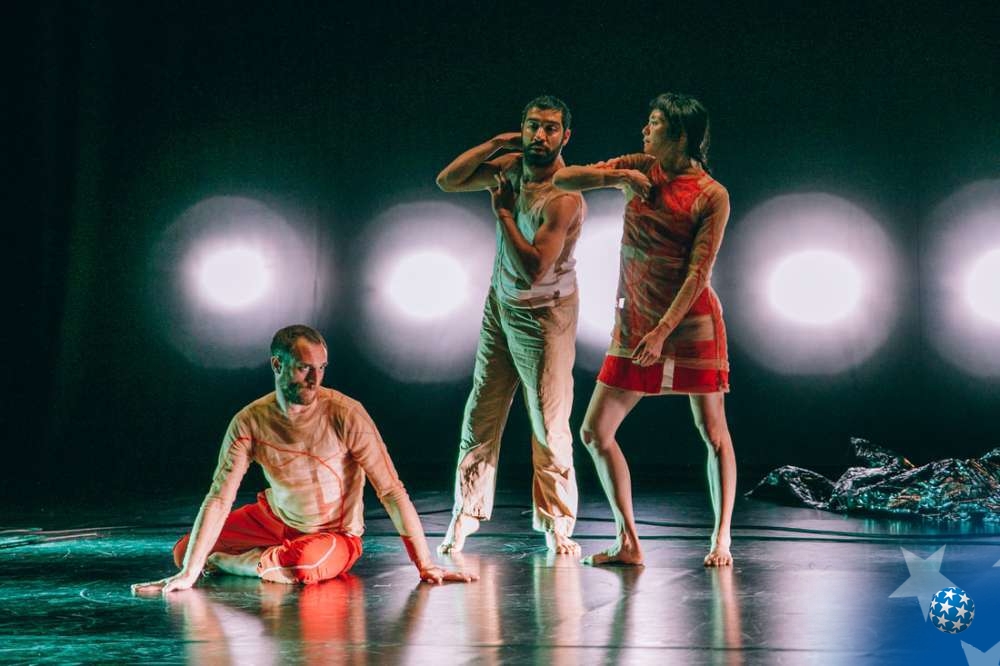 I Put a Spell On You, author: Ehsan Hemat, photo: Victor Malyshev

It has become a true challenge to make satire out of the absurd times we live in. But in Farm fatale Philippe Quesne and his grotesque scarecrows collectively succeed and make absurd theatre great again.

This farm’s inhabitants are the victims of automation, a kind of post-automatic clowns who try to find a new mission or meaning in life, and save what’s left to be saved for the future. These singing, childish scarecrows seduce the audience with music, nonsensical and word playing while dreaming of some kind of revolution. In the beauty of the aesthetics in which these creatures operate lies a large part of the attraction of the performance, which at the same time refers to a major problem in our world: how to keep it alive and liveable.

Elegantly hidden between the absurdist and naïve layers, meaning can be found without the performers making it into an explicit activist pamphlet. It is a new form of absurdism that pleases the audience with its humoristic form, but poses a feeling of doubt. The big question — what the egg of the future will reveal when it is hatched, is up to us all to answer.

Via zoom the actors and director Bobo Jelčić unexpectedly provide a wide range of emotions and humour. In the setting of online conversation, the actors use realistic and subtle means, internet connecting Chekhov to our very present time with real people in all their "pain and glory”. With a really natural acting style, they managed to emotionalize all spectators, in the theatre as well as at home.

The performance is an interesting continuation of Jelčić’s theatre research: transmitting his methodology and aesthetic approach to new media, embracing the spirit and essence of theatre and Chekhov.

Dealing with the neurotics of the characters the actors' bodies are physically stuck in the frames of their problems and develop them into poetry with a sense of hope for the future. Both for the characters and the online viewers by mirroring a united theatre community inviting the audience to turn their cameras on at the very end.

The jury of the newspaper Politika, which awards the best director of BITEF, consisted of Haris Pašović, theatre director (the chair), his colleague Ana Tomović, and the representatives of the newspapers: Gordana Popović, the editor of the culture section, Ana Tasić, theatre critic, and Borka Golubović Trebješanin, journalist, who saw twelve performances in the main programme.

The diversity of artistic approaches and a variety of forms reflect the complexity of the times we live in, and the challenges the artists must face. This year, Bitef superbly presented the complex art processes in European and world theatre, while directors and choreographers once again demonstrated the vitality of performing arts in an inspirational and inventive way.

At this double Bitef edition, the jury has decided to give two awards for the best directing:

To Bobo Jelčić, a special accolade for the direction of the performance THE CHERRY ORCHARD IN THE CHERRY ORCHARD, in the production by the De Facto Theatre Company from Zagreb. In this performance, Jelčić presented the drama of Covid-19 and the lockdown without ever mentioning them. He did not use the technology as a substitute for live theatre, but bestowed Chekhov’s characters with yet another dramatic dimension, reducing their tumultuous lives to the Zoom format, their only, small window into the world. Jelčić created an original, poignant performance about a historic moment we are in.

To Wim Vandekeybus, for the choreography and the directing of the performance TRACES, by the Ultima Vez company from Brussels. Vandekeybus created an upsetting performance about the world of disturbed ecosystems in which people, animals and plants disrupt each other, suffer, and hurt one another. The ensemble of superior dancers enthusiastically perform the choreography by the author who has already become a classic of the European dance theatre and who again, through performance, demonstrates his creative uniqueness and theatrical robustness.

Both awards were given by majority vote. 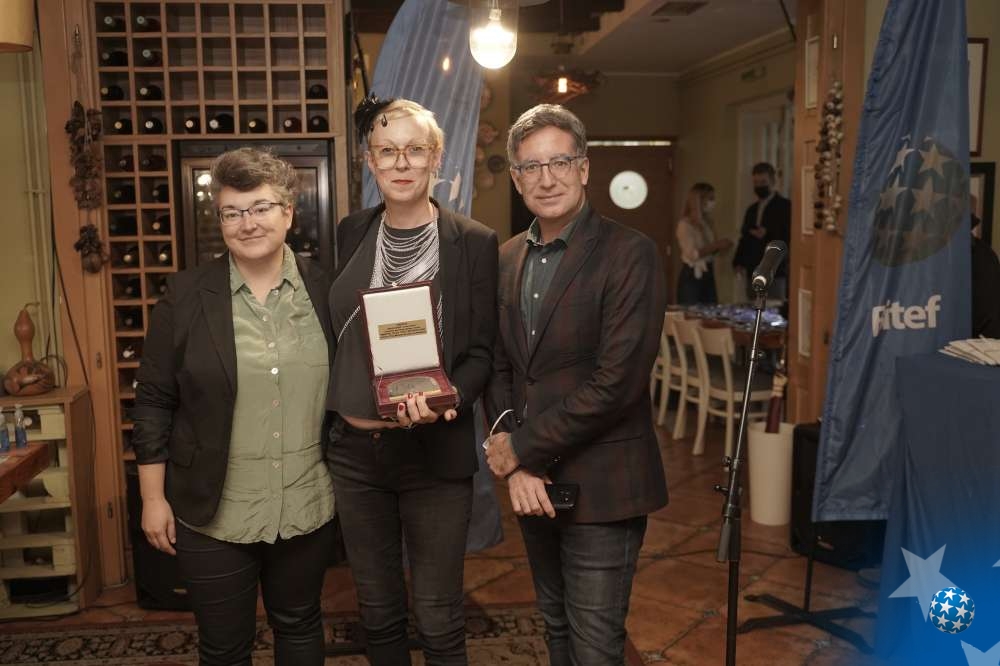 Plaques Presented to Friends and Partners of 54th and 55th Bitef